A growing body of evidence indicates, “Childhood obesity is a national epidemic. Nearly 1 in 3 children (ages 2-19) in the United States is overweight or obese, putting them at risk for serious health problems. As parents, caregivers, brothers and sisters, leaders in schools, communities and healthcare, we can work together to create a nation where the healthy choice is the easy choice.” Alliance for a Healthier Generation 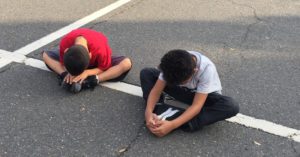 The conclusion is that children in lower income brackets face an increase in obesity and a decrease in opportunity to play. The solution is physical literacy.