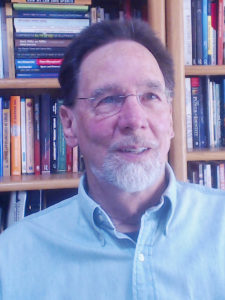 After 33 years in the Sociology Department at the University of Colorado, Colorado Springs, Jay retired from full-time teaching to focus on research, writing, and speaking on issues related to sports.

The primary focus of Jay’s professional life continues to be revising Sports in Society: Issues and Controversies, with the 12th edition published in 2017 (McGraw-Hill Education).

Jay’s most recent research has dealt with sport mega-event legacy issues, sport and national identity, and sport and development. His long time concern about the state of youth sports in the United States led him to work with Project Play, sponsored by the Aspen Institute and funded by the Robert Wood Johnson Foundation and others. The goal of Project Play is to reshape youth sports so they are organized in age appropriate terms and focused on the health and overall development and well-being of young people.

Jay’s continuing engagement with issues and controversies in sports is focused on making sports more accessible, democratic, and humane for people of all ages. This is a message he has promoted nationally and worldwide through his writing and lectures.

Jay earned his M.A. (1970) and Ph.D. (1972) degrees in sociology from the University of Notre Dame, and completed an undergraduate degree in sociology and psychology at Regis University in Denver, Colorado (in 1966) where he played basketball for four years. He and his wife, Nancy, live in Fort Collins close to their daughter and three granddaughters.