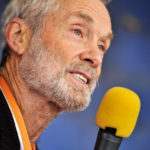 Amby Burfoot has been a runner, writer, and health-fitness advocate for more than 50 years. Winner of the 1968 Boston Marathon, he has also run every Manchester (Conn) Thanksgiving Day 5-mile since 1963.

A former elementary-school teacher and Peace Corps volunteer, Burfoot has worked for Runner’s World magazine in one capacity or another since 1978. He was editor in chief from 1985 to 2003, and later a staff writer. Since his retirement from full-time employment in 2013, he has remained a freelance writer for for Runner’s World. He has also written for the New York Times, the Washington Post, Newsweek, and other national publications, and authored or co-authored a half-dozen books including First Ladies of Running, about the pioneer women runners of the 1960s and 1970s.

Always fascinated by the science of sports and fitness, Burfoot was a guinea pig in early experiments with a then-experimental beverage named Gatorade. He has also “donated” pieces of his calf muscle to early investigations into muscle fiber types, and run in a heat chamber fired up to 100 degrees.
Having turned the corner on 70, Burfoot is particularly interested in lifetime fitness, the obesity crisis, and the challenge of motivating individuals–from pre-teens to seniors–to a healthy, sustainable lifestyle.