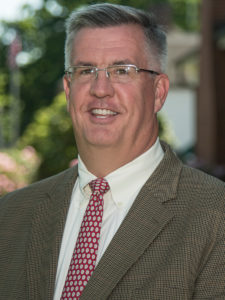 Michael Bergin is the Chief Financial and Operating Officer at Miss Porter’s School in Farmington, Connecticut.

Michael is the Chair of the Board of the Stanley Whitman House in Farmington, Connecticut.  He serves on the Board of Directors of Grace Academy Hartford, the Farmington Village Green and Library Association and the Nutmeg Group.  He is a recognized thought leader in the independent school finance and has presented several times at the National Association of Independent Schools and National Business Officers Association meetings.

Prior to joining Miss Porter’s, Michael held senior leadership positions at the National Coalition for Cancer Survivorship, the American Society of Clinical Oncology, and Georgetown University.  He previously served as a Trustee at La Salle University, his alma mater and a member of the Board of Directors of Special Love, Inc.

A lifelong athlete and coach, Michael played basketball at La Salle University and was on teams that won the Philadelphia Big 5 and MAAC championships and participated in the NCAA and NIT tournaments.  Since 2004, he has been an avid youth sports coach in basketball, soccer, and baseball.  He has slogged his way through 4 Marine Corps Marathons, a dozen half marathons and aspires to do more.  Michael has been inspired by Steve Boyle’s work around physical literacy and shares his passion to expand horizons through physical activity and wellness.

He earned her undergraduate degree from La Salle University and a Master’s in Business Administration from the Kogod School of Business at The American University.